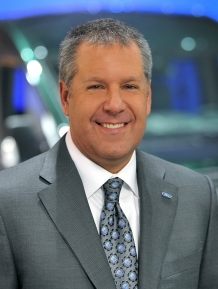 Hinrichs serves on a variety of boards and joins a long line of Ford executives in leading the United Way campaign. He succeeds Sergio Marchionne, CEO of Fiat Chrysler Automobiles, who chairs the 2016-2018 campaign.

In his new role, Hinrichs will be the face of the United Way’s annual giving campaign. He will select his cabinet that will include executives from other companies to support fundraising.

“Ford’s mission to make people’s lives better is advanced and bolstered by our long-term relationship with United Way,” says Hinrichs. “It is my privilege to serve in this leadership capacity, and I look forward to working closely with the people of metro Detroit to raise the quality of life for all people facing challenges in our community.”

Hinrichs started his current role with Ford in June 2017. He oversees the company’s global product development; manufacturing and labor affairs; quality; purchasing; and sustainability, environmental, and safety engineering. Starting in 2012, he served as executive vice president and president of the Americas and was in charge of all aspects of Ford’s North American and South American business units. Previously, he held other leadership positions at Ford.

The Ford Motor Co. Fund, the philanthropic arm of Ford, has supported United Way for Southeastern Michigan for nearly 70 years. Ford and its employees have donated more than $500 million to United Way community investments in Macomb, Oakland, and Wayne counties. Jim Vella, president of Ford Fund, serves on United Way’s board, and Ford employees volunteer with United Way causes.

United Way for Southeastern Michigan convenes partners in health, education, and economic prosperity and is supported by volunteers from business, labor, government, human services, education, and the community.