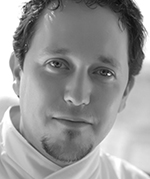 Alan Merhar has been appointed as the new executive chef of TYJ Hospitality Group, a family owned restaurant group, which includes Strada in Royal Oak, Hamlin Corner in Royal Oak, Pronto! in Royal Oak, and Primo’s Pizza in Birmingham and Royal Oak. Merhar will be overseeing Hamlin Corner and Strada, and will be responsible for creating new menus for each restaurant.

Merhar, with more than 25 years of experience, previously worked as a banquet chef at the Peninsula Grill in Charlston, South Carlolina, a cook at Tribute in Farmington Hills, a sous chef at Forte in Birmingham, and as an executive chef  at Evans Street Station in Techumseh, where he also hosted cooking classes.

Merhar, of Britton, earned a degree in  cullinary arts from Johnson and Whale University in Charlotte, North Carolina.