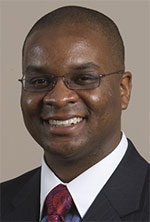 DETROIT – Shaun Wilson has been named the new senior vice president at the Detroit office of Truscott Rossman. The firm also has offices in Grand Rapids and Lansing.

Wilson most recently was vice president, director of client and community relations, for PNC, where he managed marketing and branding initiatives. Previously he was vice president, marketing manager for National City Bank. He also was managing partner of Wilson PR, a joint-venture strategic public relations and marketing firm representing top Detroit-area companies and organizations. Before that he held the position of vice president at John Bailey & Associates Public Relations.

Wilson served eight years in the U.S. Marines and has a bachelor’s in public relations from Wayne State University.