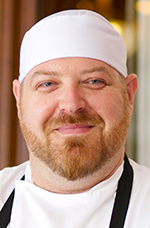 The Townsend Hotel in downtown Birmingham has named Damian Yopek as its new chef de cuisine in the hotel’s Rugby Grille restaurant.

Yopek will be responsible for working on the Rugby Grille’s menu concepts and development, as well as ensuring consistent quality in the daily preparation of all menu items.