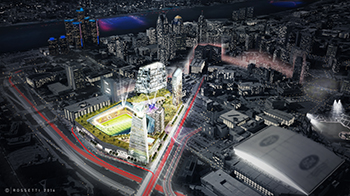 Detroit Pistons owner Tom Gores and Cleveland Cavaliers owner Dan Gilbert announced today they are partnering to bring a Major League Soccer club to downtown Detroit. The plan would include the construction of a stadium in downtown Detroit.

“I’ve always believed a sports franchise is a community asset with the power to unite and inspire people,” Gores says. “I’m excited to partner with Dan and help in Detroit’s resurgence. Together we have all the tools we need to make a new team successful.”  Gores and Gilbert, both graduates of Michigan State University with substantial sports, business and investment holdings in the region.

The ownership group’s efforts are supported by MLS and its commissioner Don Garber, who recently announced plans to grow the league to 28 teams and identified Detroit as market of great interest. 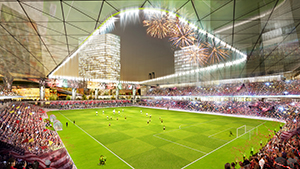 The MLS commissioner will be in Detroit this week and will meet with the potential ownership group to discuss their expansion plan.

Major League Soccer has experienced a period of unprecedented growth during the last 12 years, doubling in size from 10 to 20 clubs since 2004. The process and timeline for expansion to 28 clubs will be announced in the coming months.

Soccer has become one of the most popular sports in the state, with more than 92,000 registered youth players in Michigan.

“Soccer is one of the fastest-growing sports in the world with a passionate fan base and global reach,” Gilbert says. “Bringing a team downtown will also further energize Detroit’s urban core, which is critical to the entire city’s overall health and vibrancy.”