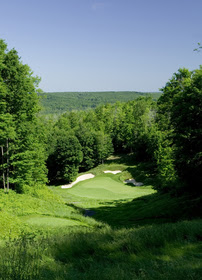 Beginning this week through Sep.11, two person teams will be able to play Threetops from the par 3 shootout tees and attempt to qualify for the National Par-3 Team Championship on September 27. The format for the teams is a two-person best ball, with scores being verified by at least one person in the group. Multiple entries are also encouraged.

The top 28-teams with the lowest scores will qualify for the finals and have a chance to win the grand prize,  a golf trip to Scotland including airfare. In addition, the finalists will have an opportunity on each of the 9-holes to earn $10,000 for a hole-in-one. Other prizes include golf packages and golf rounds to Treetops Resort.

Threetops gained national notoriety back in the late 90’s and early 2000’s when it played host to the popular ESPN Par 3 Shootout. The nationally televised event drew the legends of the game such as Jack Nicklaus, Arnold Palmer, Lee Trevino, Ray Floyd, Fred Couples, and Phil Mickleson to name a few. Trevino put the event on the map when he made the most lucrative shot in golf with his hole-in-one for a million dollars in 2001.

Treetops is offering a special package available starting from $118* per person based on double occupancy from now through September 11 featuring: one night lodging, one round on Threetops with qualifier entry fee, one breakfast buffet.

Additionally, golfers can simply add a $10 entry fee to their greens fees when they play their already scheduled round on Threetops.  Official scorecards and rules can be obtained from the staff at the Treetops North Golf Shop, and those who participate will receive additional discounts in the golf shop.