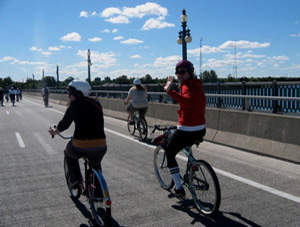 The number of bicycle commuters in Detroit has more than doubled over the last two decades, according to a new report from the Alliance for Biking & Walking.

So what makes Detroit, a city built for four-wheeled traffic, so bike-friendly?

“Number one, it’s the abundance of infrastructure,” says Karen Gage, co-owner of The Wheelhouse in Detroit. “The city was built for (two) million people but there are less than a million now, so we have lots of roads and not a lot of traffic.”

Gage, who opened her riverfront bike rental and tour shop in 2008 with Kelli Kavanaugh, uses her bike as a main mode of transportation. Most Wheelhouse employees do the same.

Gage says that nowadays, most people entering the Wheelhouse are asking about bikes for commuting. And in her opinion, that’s the most convenient way to get around the city. “When you bike, you can avoid parking (issues) and it’s fun,” Gage says. “It’s faster, healthier, and best of all, it’s free.”

But more could be done, says Todd Scott, Detroit Greenways Coordinator of the Michigan Trails and Greenways Alliance. “We can’t just put paint down and expect everything to be perfect,” he says. “We need to deal with problems like vacant housing, stray dogs, and speeding cars. We need to address everything.”

Additionally, Detroit needs considerable help to improve pedestrian safety. In 2011, Transportation for America listed Detroit as the 12th most dangerous metro area for pedestrians. To address some of the problems, Gage and Scott advocate that driver training programs include information on how to interact and share the road with cyclists.

“Especially with suburban drivers, and the farther north you get, the worse it gets,” Scott says. “We need to do more locally so people understand how to deal with bikers from a motorist perspective.”

Also threatening bike travel is a proposed improvement project for I-94, from I-96 to Conner Avenue. The MDOT project would eliminate nine bridges over the highway, including some pedestrian crossings. “As of today, it’s pretty easy to get around,” Gage says. “The only thing that concerns me is future freeway modifications, because getting over the freeways is such an obstacle for cyclists. I’m fearful that in future expansion projects that pedestrian roads may be removed.”

There is hope that proposed bike lanes, along with new greenways, will provide alternatives for cyclists looking to cross freeways. The Greenlink project, for example, connects southwest Detroit, Corktown, and Mexicantown. The project, completed last October, was the first phase of the city’s Urban Non-motorized Transportation Master Plan. The Master Plan ultimately calls for 400 miles of bike lanes.

Local groups are also undertaking projects. In 2009, the Dequindre Cut, a one-mile greenway located east of I-375, was opened to the public. Formerly a Grand Trunk Railroad line, the trail connects the Detroit River, the RiverWalk, Tri-Centennial State Park, and Eastern Market. Future plans would extend the Cut to Mack Avenue.

For those looking to bike for recreation in the city, there are numerous small events throughout the summer. Critical Mass, which meets in Woodbridge, runs the last Friday of every month. Bike the Bridge, an event that takes cyclists from Detroit across the Ambassador Bridge, will take place June 17. The MGTA is planning a Bike to Work Day next month as May is National Bike Month.