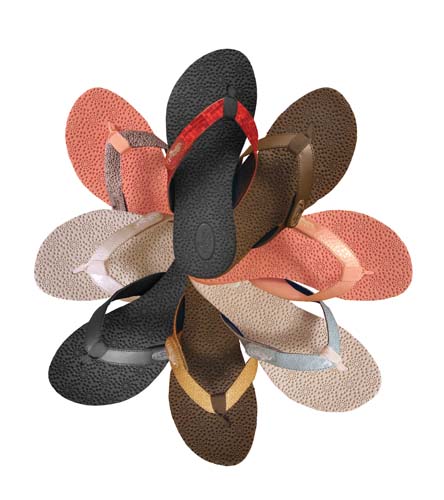 Most women wouldn’t consider a vacation on a single pair of shoes. Let’s face it; women tend to over pack because they desire a complementary wardrobe from head to toe! But lugging around multiple pieces of luggage is no consolation, especially with the airlines instituting baggage fees.

If only there was a shoe that was interchangeable. Enter Bandals Footwear. The Waterford-based company came up with the concept after the inventor watched his wife lug a bag of shoes around on spring break. The idea of creating one shoe that can match every bathing suit, dress, or outfit was soon a reality.

The company, launched in 2008, has been recording strong sales. It helped that the sandals were featured at Silver Spoon’s 2010 Pre Oscars gifting suite, which benefited the American Red Cross. The result of the promotion saw stars like Sarah Palin, Paula Abdul, and Anna Lynne McCord sporting Bandals around town.

Here’s how it works: An interchangeable band seamlessly integrates with the base of the shoe. This allows the sandal to be quickly and easily changed. By simply sliding different colored bands through a mid-sole slot, multiple styles can be worn at a moment’s notice. Hence the company’s motto  — “Changeable by Design.”

The bands come in a variety of colors, patterns, and textures (such as leather). From their fully shaped arch support, slip-resistant base, and cradled heel cup these sandals are ideal for women in professional circles.

“When we were researching the potential for providing financial support for Bandals’ expansion plans, there was no question they had a unique product that could really catch on with women,” says Mike Semanco, president of Hennessy Capital in Huntington Woods. “They are very energetic, well organized, and have plenty of new products in the pipeline.”

Bandals Footwear is available online and in 400 specialty stores across the United States, as well as in 16 different countries. For more information, visit www.bandals.com.