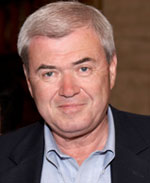 The death on January 10, 2013 of the irreplaceable, irrepressible, passionate business leader and champion of Detroit, Ted Gatzaros will be mourned by his devoted family and many friends. From his arrival at 17 from Greece, he demonstrated remarkable qualities of initiative and sustained hard work that, together with his partner, the love of his life, Maria, built a legacy of extraordinary accomplishments. Accomplishments that are shared today by their talented children Nico and Ellena, her husband Christos Moisides and three engaging and adored grandchildren.

He was perhaps most well-known for his instrumental role in bringing casinos to Detroit, but his efforts to restore and protect Detroit landmarks, and return them to viability and beauty was unmatched. Among the structures he and his partners purchased and perhaps most remarkable, was the turning of the wood timbered 1896 Ferry Seed Company warehouse  into the award winning  International Center Building in Greektown. Ted tied the Center together with the acclaimed boutique Atheneum Suites Hotel and the International Grand Ballroom.

Ted always had a smile and never forgot a name or a face. These qualities, together with the efforts of his partners, made him one of Detroit’s leading restaurateurs and developers. Today, the three Detroit area Fishbone’s restaurants are lively popular and successful venues. Most recently, in February 2012, to much acclaim he, together with Nico, opened the refurbished London Chop House. This Detroit landmark was just named one of Detroit’s top 10 in 2012.

Ted’s generosity matched his entrepreneurial spirit. He gave back to numerous civic and charitable associations. These include holding board seats on the Detroit Economic Growth Corporation, the Detroit Medical Center, and the Central Business District Association and its Foundation. His energy, his leadership, and Maria’s were most recently recognized in 2012 by the award of Honorary Doctor of Laws Degrees from Northwood University.

But Ted was much more than business.  A remarkable cook and unmatched host, he had culinary talents to rival any of the great chefs. From risottos to lamb, accompanied by his favorite wines, the Gatzaros home, a beautiful reclaimed and restored lakeshore antiquity, has welcomed many friends over the years, from the gardener, the neighbors, colleagues, political aspirants (who sought his advice), as well as leaders of business, and even a President of the United Sates. Like his advice, his honest, and often irreverent and cynical sense of humor will be recounted for years to come. Often Ted could be found fishing along his home’s break-wall, or devouring books on economics and politics, or listening to classical and Greek music. He was nourished by the Friday lunches and Saturday breakfasts with his cadre of close friends. A person who loved to sing, he even picked up a childhood musical instrument, the accordion, from time to time.

His grandchildren, one a young adult, and two little ones, were the object of his unconditional affection and love. His success as an entrepreneur and civic leader is only exceeded by his devotion to his friends and exceptional family. He will be deeply missed by all.