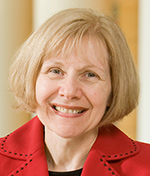 Eva L. Feldman, M.D., Ph.D., director of the Ann Arbor-based Taubman Institute, has been named the 2015 recipient of the Chuck Newman Impact Award from the Michigan Israel Business Bridge.

The award, named for the organization’s co-founder, is annually presented to individuals who personify group’s goal of linking Michigan and Israel.  Dr. Feldman is a leading researcher in the quest for a cure for ALS and is a professor on the faculty of the University of Michigan Medical School as well as a practicing physician.

Both as director of the A. Alfred Taubman Medical Research Institute and in her own laboratory work as a clinician-scientist, has been instrumental in several collaborations among scientists in both countries.  In addition, Dr. Feldman serves as an advisor to the United States-Israel Binational Science Foundation, which funds such scientific partnerships.

Among other endeavors, Dr. Feldman has been working with Dr. Benjamin Reubinoff, director of the Human Embryonic Stem Cell Research Center at Hadassah Medical Center in Jerusalem on Stem Cell Research. The team has received a grant from the United States-Israel Binational Science Foundation to develop in vitro human tissue containing the genetic defects for ALS, which will enable scientists to test new therapies in the laboratory.

Dr. Feldman also has taken a leadership role in exchanging discovery and ideas with Israel-based researchers by inviting several leading scientists from Hadassah University in Jerusalem to visit the University of Michigan as visiting professors.

Dr. Feldman will accept the award at the MIBB’s Ambassador Awards dinner on Oct. 14 at The Reserve in Birmingham.

Ticket and sponsorship information for the Ambassador Awards event is available at michiganisrael.com.