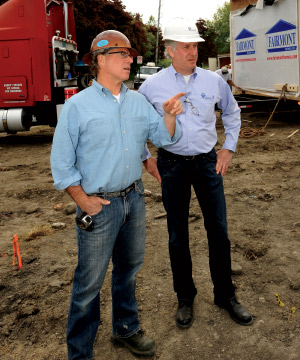 When Mark Lewis was finalizing plans for an affordable residential development on Detroit’s east side, he never expected to hear from Steve Thomas, the 14-year host of the public television show that launched a national movement — This Old House. What was curious is that Thomas was inquiring about Lewis’ urban development and its green properties.

“I was wondering why someone like Steve Thomas was interested in our project because you don’t get calls like that every day,” says Lewis, right, a partner of Community 1st Development and Lewis/Klein Properties, both in Farmington Hills.

As it turns out, Thomas, left, is host of a new show called Renovation Nation, which runs on the Discovery Channel’s subsidiary network, Planet Green. A longtime builder of manufactured homes, Lewis began experimenting with adding energy-efficient appliances and Energy Star fixtures a few months back.

“Our plan was to build the homes in a factory so that when they’re delivered to the site, they’re 95 percent complete,” Lewis says. “Market rate is between $140,000 and $185,000, but the homes we’re completing will be subsidized.” Thomas, who visited the construction site in May (the episode is set to run in January), says he came away impressed.

“This is a model for rebuilding that can be replicable and scalable at any price point,” he says. “In this case, one city block at a time.”