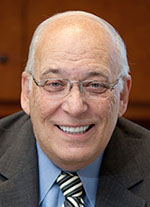 For more than 10 years, Weiner has led St. Joseph Mercy Oakland through a $300 million campus redevelopment, the establishment of the Michigan Stroke Network (using robots to connect stroke patients with specialists across the state), and the opening of its South Patient Tower.

Weiner began his administrative career as an administrative resident at Oakwood Hospital in Dearborn. His health care career began as a pharmacist when he received his PharmD in clinical pharmacy from Wayne State University.