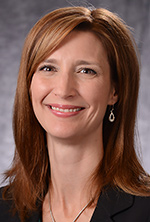 Shannon Striebich has been named the new president of St. Joseph Mercy Oakland in Pontiac.

She implemented the hospital’s first black belt and six sigma program resulting in $6 million in improvements. As vice president of operations, Striebich was the executive lead of the $145-million construction of the new 8-story patient tower and $60-million surgical pavilion.

She also was regional chief operating officer of East Market for Saint Joseph Mercy Health System, responsible for operations at both 443-bed St. Joseph Mercy Oakland and 304-bed St. Mary Mercy Livonia. She began her career at The Detroit Medical Center as an administrative fellow before taking roles as manager of operations and director of physician services at DMC Physician Group and, later as administrative director at Children’s Hospital of Michigan.

Striebich, of Rochester, is a member of the Midwest Chapter of the American College of Healthcare Executives where she serves as a member-at-large. She is an adjunct faculty member at the University of Detroit Mercy and active in the Rochester community, including serving on the Rochester Community Schools Parent-Teacher Association.