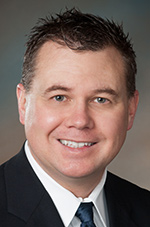 John Kepros, M.D., has been named new chief of medical staff  for Sparrow Hospital for a two-year term.

Kepros will represent and communicate the views, policies, concerns and needs of Sparrow’s more than 950 medical employees while working with Sparrow’s executive directors.

He has served the medical staff on multiple committees and holds a master’s in both business administration and surgery in addition to his traditional medical training. Kepros earned his medical degree from the University of Iowa.

Kepros is also a Fellow of the American College of Surgeons and he completed his fellowship in surgical critical care and trauma at Yale University.