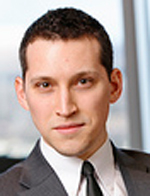 Adler joined Jaffe in 2006 as a summer associate and became a full-time associate in September 2007. He is a member of the firm’s Litigation Practice Group, specializing in commercial litigation. Prior to his career at Jaffe, Adler interned in the Michigan State Appellate Defender Office in the Constituent Services Division during the Gov. Jennifer Granholm administration. He also interned in the criminal division for U.S. Attorney Jeffrey G. Collins in the Eastern District of Michigan.