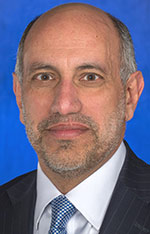 LANSING — Gov. Rick Snyder has named Nick Khouri, of Plymouth, who has extensive experience in both state government and the private sector, has been named Michigan’s new state treasurer. He replaces Kevin Clinton who is returning to the private sector.

Khouri returns to state government after serving as senior vice president of corporate affairs at DTE Energy in Detroit, where he oversaw governmental and regulatory relations, community affairs, and communications.

He also served as vice president and treasurer at DTE and a vice president of Public Sector Consultants, where he focused on economic development, public infrastructure, and state and local tax policy. In the 1990s, Khouri was the state’s chief deputy treasurer and chief economist of the Senate Fiscal Agency. He chairs the state’s Investment Advisory Council.