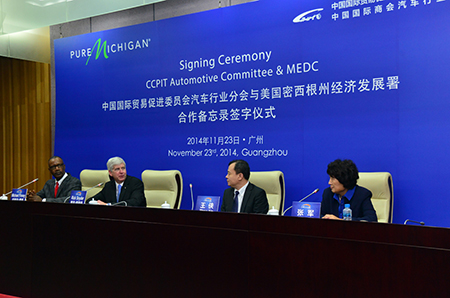 GUANGZHOU, China — Gov. Rick Snyder met with business executives, government officials, tourism operators, and media from Shengyang and Guangzhou over the weekend and today, making the case as part of a Michigan investment mission to China.

“With 70 percent of global automotive research and development happening here in Michigan, and our strong manufacturing base, talent and business-friendly environment, there is no better place in North America for Chinese companies to expand than in Michigan,” Snyder says. “We are already seeing significant Chinese investment in Michigan, but this is just the beginning of what we have to offer the China market.”

Snyder started the weekend by meeting with executives from a leading Chinese machine tooling company to discuss possible investment in Michigan, stressing the potential Michigan offers for additional business cooperation and investment opportunities. The governor highlighted Michigan’s skilled workforce, research and development assets, and manufacturing capabilities, as well as the state’s strong interest in expanding ties with China.

He also met with government officials from Shenyang and the Liaoning province in northern China on Saturday.

On Sunday, Snyder and the Michigan delegation began the state’s first official visit to Guangzhou in the Guangdong province in southern China. With a population of more than 106 million, Guangdong is the richest and most populous province in China.

Snyder and the delegation next head to Shanghai, China’s largest city with 24 million residents on the central coast.

The mission is Snyder’s fourth to China since being governor and his administration’s eleventh investment mission since taking office in January 2011.