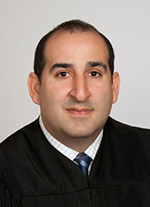 Viviano is chief judge of the 16th Circuit and Macomb County Probate courts. He fills a vacancy created by the resignation of former Supreme Court Justice Diane Hathaway.

“Judge Viviano has a distinguished record of judicial integrity and innovation,” Snyder said. “His deep respect for the judicial branch of government and his commitment to the rule of law will serve Michigan well. I have every confidence that he will be a compassionate, principled justice. He is an outstanding addition to the Michigan Supreme Court.”

Viviano, 41, was elected to the 16th Circuit Court in 2006. Prior to taking the bench, he worked at Dickinson Wright PLLC in Detroit and Jenner & Block LLC in Chicago before starting his own firm in Mt. Clemens. He also served as city attorney for Center Line.

“I thank Gov. Snyder for his confidence in my abilities and for the privilege of serving the people of Michigan on our state’s highest court,” Viviano said. “It is a tremendous responsibility and one that I cherish. I look forward to working with my esteemed Supreme Court colleagues to provide the thoughtful, impartial justice that citizens deserve.”

Viviano has been active in various initiatives to improve the court system. In 2008, he was selected by the Michigan Supreme Court to participate in a pilot project to reform the jury system. Several of those enhancements were adopted by the Supreme Court and are being used by judges statewide. Viviano also led the 16th Circuit Court’s e-filing pilot project and is a strong advocate for technological innovation in the court system.

“I have been privileged to work with Judge Viviano over the years,” Dana Warnez, president of the Macomb County Bar Association, said. “He was diligent, innovative and hard-working as a young lawyer in private practice, and he brought those important qualities to the bench. The Macomb County legal community is very proud of him. He’s an excellent addition to our Supreme Court.”

Viviano earned degrees from Hillsdale College and the University of Michigan Law School.