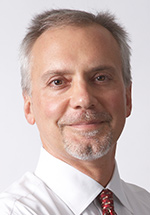 Russell Sykes, managing partner at SmithGroupJJR Inc., has been named an Outstanding Engineering Alumnus by Penn State’s College of Engineering.

Established in 1966, the Outstanding Engineering Alumni Award is the highest honor bestowed by the college and recognizes graduates who have reached exceptional levels of professional achievement. He earned his bachelor of architectural engineering degree in 1985. Sykes is a Professional Engineer and a LEED Accredited Professional.

Following graduation, Sykes joined SmithGroupJJR’s Detroit office as an electrical engineer. Over the next 30 years, he held various positions within the firm including science & technology studio leader, director of operations, and office director for the Detroit office.

Sykes was instrumental in establishing a SmithGroupJJR office in Shanghai, China, and served as director of China operations. He is currently principal-in-charge of a 5-million-square-foot automotive research and development center in Changchun, China, for First Automotive Works, China’s top manufacturer of passenger cars and commercial trucks and busses, and the 230,000-square-foot Facility for Rare Isotope Beams, which is under construction in East Lansing.

Sykes will receive his award, along with 11 other recipients, at a ceremony on April 14 at the Nittany Lion Inn on Penn State’s University Park campus.