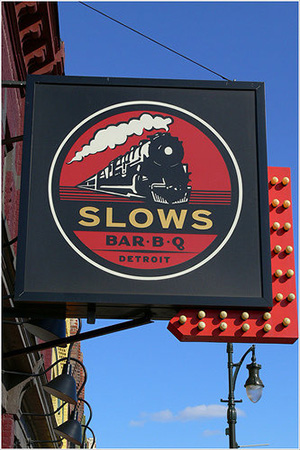 PONTIAC — Slows Bar-B-Q is partnering with The Strand Theater in Pontiac to open a new 6,500-sq.-foot, full-service restaurant adjacent to the performing arts center.

“We chose Pontiac as the site of our first Metro Detroit expansion for the same reasons we chose Corktown, it’s an underserved community with a defined identity and potential for an exciting evolution,” says Slows co-owner Phil Cooley. “We are excited to become a part of the neighborhood and serve up great tasting Slows Bar-B-Q to the folks who live, work, and visit Pontiac.”

Slows at The Strand will serve signature favorites such as brisket, ribs, pulled pork, mac and cheese, and sandwiches like The Reason and The Yard Bird. The restaurant also plans to offer a broad craft beer selection heavily focused on Michigan brewers.

Theatergoers attending performances at the 838-seat performing arts center will be able to enjoy food and drink from Slows while attending concerts, Broadway shows, and other events. When it debuts, the restauarnt will be open between six and seven days a week for lunch and dinner.

“We selected a food and beverage partner who aligns directly with our values, whose brand is synonymous with community partnership, and we’re ecstatic to have found that in Slows,” says Kyle Westberg, owner and developer of The Strand.

TDG Architects is designing the space and West Construction Services will be responsible for the build-out. Construction on the location will begin in early 2015 and the restaurant will open in tandem with the theater in late 2015.

This is the Slows third expansion outside of Corktown.