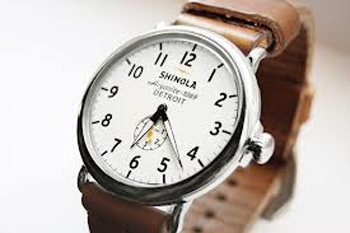 Shinola in Detroit, the urban assembler of watches, bicycles, leather goods, and journals, is expanding globally. Launched in 2012, the company showed off its line of watches in late March at BASELWORLD in Switzerland, the largest annual watch and jewelry show that draws more than 1,400 companies.

“The level of interest in Shinola at Basel was surprising, given we are just out of the gate,” says Heath Carr, CEO of Bedrock Manufacturing in Dallas, Shinola’s parent company. “Step one was to get Shinola launched and make sure we could make a quality product, and the next step was to go to Basel. With those two goals met, we are reviewing potential distributors, agents, partners, and store locations in Europe.”

Carr says the goal is to “find the right partners that are a good cultural fit in terms of selling our product, telling our story, and marketing the brand.” The company is researching the top fashion cities like London, Paris, Milan, and Berlin for store locations, whether company-owned or through existing retailers and department stores.

“We plan to have limited distribution in Europe later this year, and then execute our full plan,” he says. “Following that, we’ll be looking at Asia, so cities like Tokyo, Hong Kong, Beijing, and Shanghai. We also plan to have a presence in Australia.”

The company will open its first store on Friday (June 28) in Detroit’s Midtown District, followed by New York later this summer. In addition, it will sell its watches in Barneys, Saks Fifth Avenue, and Neiman Marcus in the fall. Locally, Shinola watches will be available at Tapper’s Fine Jewelry. The watches are available online, as well, though on a limited basis. This year, the company will produce some 45,000 watches.

Overall, the company plans to expand its product mix across a range of lifestyle offerings. In addition to selling watches, urban bicycles, linen journals, and leather goods — the company was named after a once popular shoe polish that inspired the World War II-era phrase, “You don’t know sh*t from Shinola” — other merchandise will include lighting, blankets, footwear, and an array of consumer-orientated products.

“When you talk about building brands, it’s about a great product that also has an aura or a mystique about it, and Shinola has that,” says Jim Bieri, principal of Stokas Bieri Real Estate, a retail-focused boutique real estate firm in downtown Detroit. “Shinola was born from the same people who started Fossil watches, which is a major brand around the world. They have those connections, and they have more of a chance to succeed than most any else.”