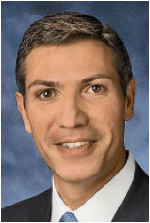 DETROIT — Ramzi Hermiz, president and CEO of Shiloh Industries Inc., a supplier of lightweighting, noise and vibration solutions, was named Entrepreneur of the Year at Ernst and Young’s recent gala held at the Cleveland Convention Center.

Shiloh, with offices in Troy, has locations across Asia, Europe, and North America and has approximately 3,300 employees.

Hermiz, recipient of the Manufacturing and Distribution category award, was among the honored in Northeast Ohio of 26 regional finalists in varying categories. Regional recipients will have a chance to be selected as national finalists and recognized among an esteemed group of entrepreneurs at the awards gala in November in Palm Springs, Calif.

The awards program recognizes entrepreneurs who demonstrate excellence and extraordinary success in areas such as innovation, financial performance and personal commitment to their businesses and communities.

“This honor is particularly meaningful to me as it reflects the contributions and hard work of all at Shiloh who share in our own vision and commit to its achievement everyday,” Hermiz said.

Since joining Shiloh in 2012, Hermiz has strengthened the company’s product technology, global footprint and value proposition through organic growth and several strategic acquisitions. Earlier this year, Hermiz was named a 2015 Champion of the New Economy by DBusiness magazine, an award honoring Detroit-area business leaders for their commitment to moving the economy forward.

Hermiz has lead Shiloh’s growth in delivering a variety of lightweighting solutions that will help global automakers meet fuel economy initiatives. Under his leadership, Shiloh has more than doubled in annual revenue to more than $1 billion over the past two years and was recently named a Forbes Top 100 Best Small Companies in America.

Now in its 29th year, the EY program has expanded to recognize business leaders in more than 145 cities in more than 60 countries throughout the world.