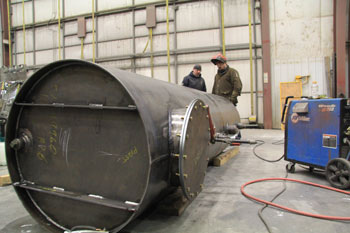 ONAWAY — The newest addition to the Shepler’s Mackinac Island Ferry fleet, the $3.8 million, 85-foot Miss Margy, is under construction at Moran Iron Works.

“This is a big, precedent-setting job for us and we want to make sure we construct a vessel that the Shepler family and the state of Michigan can be proud of,” Moran said.

Employing a crew of 13, construction will require some 8,700 hours on the shop floor over the next four months. The all-aluminum, 281-passenger ferry – named after Shepler’s mother – is Shepler’s largest and will have a top speed of about 40 miles per hour. Scheduled to carry its first passengers in July 2015, it will include an air-conditioned cabin, as well as a ventilation system to remove interior condensation from windows, improving the view for passengers during inclement weather.

A third-generation family business, Shepler’s is celebrating its 70th anniversary this year. The company currently has a fleet of five passenger ferries and one cargo vessel. “We’ve come a long way since my father launched this business with one speed boat,” Shepler said.