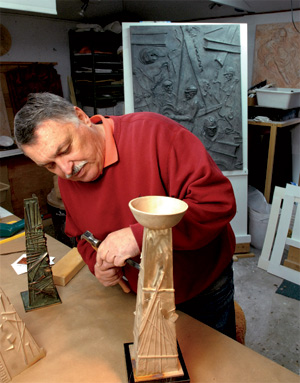 A few weeks before Jimmie Johnson won the 2008 NASCAR Nextel Cup Series in November, local sculptor Sergio de Giusti got a call from Tim Nasso, vice president of marketing for Dow Automotive in Auburn Hills. Timing was of the essence. Could Giusti create a bronze trophy for Johnson by early December? “It was tight, especially when you have to deal with a foundry,” de Giusti says. “But like the rest of Detroit, I’m used to meeting deadlines.” The Redford Township artist, a native of Italy, is perhaps best-known for creating 16 bronze reliefs for the UAW in Hart Plaza. “I didn’t create the arc; that was my friend David Barr,” Giusti says. “But the reliefs were something else. They represent the enduring spirit of the labor movement, and each [one] is set in a granite boulder.” (Note the mold for one of the reliefs behind de Giusti, at left.) Numerous other de Giusti works can be found at Wayne State University, the headquarters of Blue Cross Blue Shield of Michigan, and inside Dow Automotive’s headquarters. He also creates bronze medallions for European race-car drivers. “What I like about Sergio is that he works in a distinctive, figurative style,” Nasso says. “He’s passionate, and he gets the job done on time — and on budget.” Dow Automotive commissioned what it calls the Contingency Award as part of its partnership with NASCAR. Last year, the supplier began installing protective foam in race cars to limit the impact from a side crash. After every race, Dow presents a check for between $5,000 and $10,000 to the driver who makes the best strategic move. At the end of the year, NASCAR selects the most adept driver and awards a trophy, plus a check for $100,000, at New York’s Waldorf-Astoria hotel.