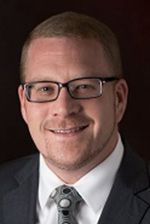 Christopher Hogg has joined Secrest Wardle as a partner in the firm’s Troy office.