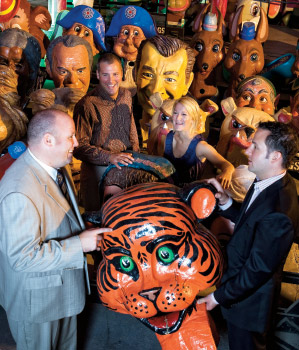 When Sean P. Moran and a group of friends learned that many of the nearly 400 heads owned by The Parade Co. in Detroit were in disrepair and couldn’t be used for the annual Thanksgiving Day Parade, they developed a program called the Big Head Corps to raise funds for restoration. Through a series of networking functions, Moran, senior vice president of wealth management for Smith Barney in Grosse Pointe, and others have signed 65 supporters who paid $200 apiece to restore the heads. In return, the donors get to march in the parade with the head of their choice, along with other favors. “It just seemed a waste that many of the heads went unused,” says Moran, left. Joined (clockwise) by Brian Urso, Kerry Doman, and Jim Dailey, Moran says they plan to sign up more than 100 supporters this year. “Our goal is to bring attention to the parade and to network among a good group of people,” says Doman, CEO of After5Detroit.