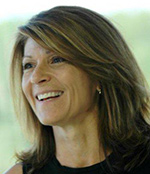 Detroit-based Rock Gaming LLC has named Gayle Joseph as vice president of communications. In her new role, Joseph will be responsible for managing all internal and external messaging throughout the company.

Previously, Joseph worked at Edelman, where she served as executive vice president where she oversaw activity in the Detroit market, including the firm’s work in automotive, health care, manufacturing, and technology. She also managed Gayle Joseph Group, an integrated marketing communications firm with clients in the automotive, health care, wealth management, technology, and nonprofit sectors.

Before starting her own firm, Joseph was a partner and managing director at Lambert, Edwards & Associates, where she oversaw operations of the firm’s Detroit office and led the automotive practice. She is a member of the Automotive Press Association, Automation Alley, Detroit Economic Club, Detroit Regional Chamber, Inforum: A Professional Women’s Alliance, MICHauto, and the Public Relations Society of America.

Joseph earned a bachelor’s in journalism and public relations from Northern Illinois University.