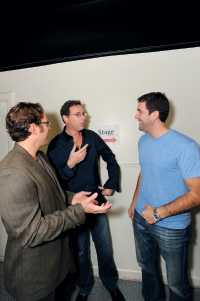 While comedians like Bob Saget hone their craft onstage, they’re often tapped for business advice backstage. Although Saget, star of such TV shows as Full House and America’s Funniest Home Videos, was born in Philadelphia, he considers Detroit almost a second home. The reason: After meeting Southfield native Michael Young on the road, the pair became fast friends. “Bob has 30 years of experience in the industry and has a wealth of knowledge on touring, management, bookings, and marketing,” says Young, host of the Young American Comedy Tour. Despite the fact that Young resides in Beverly Hills, Calif., he returns to Detroit often. “Most of the comedians stay at my mom’s house (in West Bloomfield Township) when they’re in town,” says Robert Young, Mike’s brother and executive producer of the comedy tour. “She’s like the den mother. She cooks, she cleans — she’s Mother Goose.”

The family bond has been a boon for business. The national tour has been a sellout and includes up-and-coming comedians like Tony Rock (brother of actor Chris Rock), Sebastian Maniscalco, and Bret Ernst. In addition, Michael recently sold a show he wrote called Forever Young to ABC and is working on a movie called Right Angle, to be filmed in Michigan. And when Robert isn’t producing, he operates Farmington Hills-based Young and Sons Insurance Reconstruction Specialists, which specializes in insurance claims.

“The Young brothers are a force to be reckoned with,” Saget said before a recent sold-out show at the Royal Oak Music Theatre. “If you don’t believe me, just ask them.”b