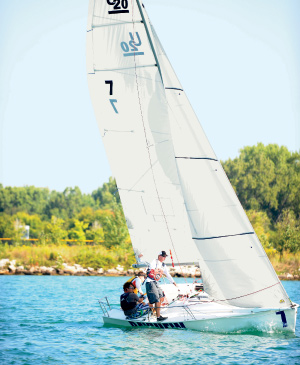 Though Detroit’s Bayview Yacht Club “is a little pea patch in the middle of the country,” Commodore Rob Amsler notes that it hosts the longest continuous-run, freshwater regatta in North America — the annual Pure Michigan Bayview Mackinac Race.

“We draw more than 220 sailboats (every July) from numerous classes, and there are 4,000 people directly tied to the crafts,” says Amsler, a family doctor. “When you add in all the families and tourists for all of our domestic and international regattas, that’s millions of dollars in economic impact.”

While some private clubs have struggled to stay afloat, Bayview, founded in 1915, has close to 1,000 members, and those numbers are growing. The reason: The club hosts up to seven regattas each year.

“We host more international races than other clubs of our size, and one reason is that our club owns many of the boats,” Amsler says. “That way, the sailors are on even footing, and they’re more likely to participate.”