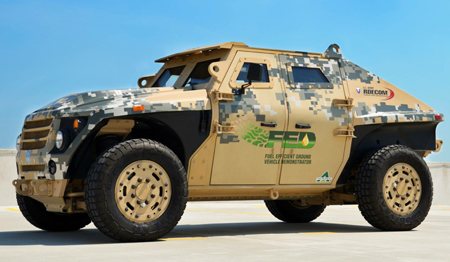 DETROIT — After two years of on-the-ground testing, the Ricardo-engineered Fuel-Efficient Ground Vehicle Demonstrator has proven to be as good as the simulation models projected, according to data analyzed by the multi-industry consultancy for engineering, technology, project innovation and strategy. The analysis released today proves that when compared to the military’s regularly outfitted M1151 HMMWV, the FED experienced a 72 percent improvement in fuel economy. The FED’s performance was assessed using a number of realistic duty cycles including highway, off-road and idle conditions.

“We implemented a relatively conservative approach using near or in-market technology to reach our fuel economy objectives, and we have proven they are achievable,” said Wesley Scharmen, Ricardo chief engineer on the project. “This kept costs down and increased the production feasibility of the end product.”

The FED uses a supercharged Cummins I4 engine, low-rolling resistance Goodyear tires, an Alcoa Defense developed aluminum structure and other driveline improvements from Ricardo. The project was developed as a “clean sheet” with a Ricardo-led team that included personnel from the U.S. Army Tank Automotive Research, Development and Engineering Center working alongside top industry suppliers.

The FED was built at Ricardo’s Detroit facility in 2011 and later displayed at the Pentagon.  For the last 19 months, it has been undergoing testing at the U.S. Army’s Aberdeen Proving Grounds in Maryland and other locations.

Not only does the FED deliver outstanding fuel economy numbers, but the vehicle boasts better performance, as well.  Driving tests prove significantly improved acceleration over the current vehicle, even when loaded to nearly seven tons.

“The team took a total-vehicle approach to improving fuel economy,” said Carl Johnson, TARDEC’s team lead for FED. “And they did it using proven technology. When government and industry teams work together the results can be substantial.  A 72 percent increase in fuel economy provides us with a significant competitive advantage in the field.”

That’s because fuel is the second most delivered commodity to ground troops, right behind water.  Reducing fuel consumption, along with improving military vehicle technology and lowering the nation’s oil dependence is the FED program’s goal.

“Ricardo’s forecasting technology projected precisely what we experienced in our real-world capability studies,” said Johnson. “The data was right on the money.  Moreover, the Ricardo–led team has helped us to develop a FED capable of becoming a credible military vehicle.”

The FED was recently featured on the popular web show, “Jay Leno’s Garage,” along with Gen. Dennis L. Via, commanding general of Army Material Command. The segment can be seen at www.jaylenosgarage.com.