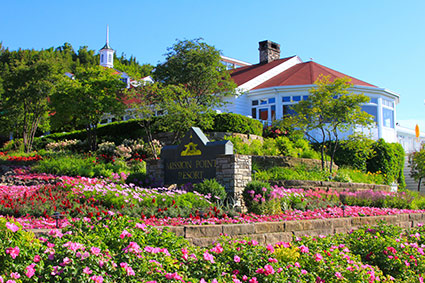 The resort, was purchased last December by Dennert and Suzanne Ware of D & S North, has also created new food and beverage offerings, horticulture, music and arts programming to elevate the island resort experience for visitors.

“It’s a new day at Mission Point Resort. Our family is committed to Mackinac Island, celebrating the best of the destination’s history and its unique Americana feel while positioning Mission Point Resort in a very relevant, friendly and fresh way,” says Liz Ware, co-owner and daughter of Dennert and Suzanne.

As part of a three-year master plan, Mission Point Resort will see ongoing improvements to guest rooms, a new, larger full-service spa facility in 2016 and, by 2017, an all-new, expanded pool complex. Ware notes that more details will be announced later this season.

Visitors to Mission Point Resort this season will taste and sip the very best of the destination. The beverage program, curated by W. Bradley McCallum, vice president and managing director or the resort, showcases spirits and wines from the region, as well as brews and small-batch barrel aged cocktails exclusive to the resort.

Mission Point Cream Ale from Petoskey Brewing, New Day IPA from Saugatuck Brewing Co. and Sinclair’s Scotch Ale from Mountain Town Brewing Co. are created for and sold only at Mission Point Resort. The resort will also be debuting barrel aged bottled Negronis and Manhattans made exclusively for the resort.

A new, seasonal cocktail menu, integrates regional spirits with seasonal ingredients grown in the newly commissioned Cocktail Garden. Among the variety of herbs and flora selected for this season’s garden are: lavender, rose-scented geraniums, lemon verbena, golden lemon thyme, and a host of different mints.

Mackinac Island boasts some of the oldest, most lush French lilacs in the nation, and Mission Point embraces this with a first to the island, an inaugural series of cocktails using lilac essence. The resort debuts vodka, tequila, rum and gin based libations using this signature cocktail enhancement. The Mission Point Lilac Cocktail Series will be available all season including Mother’s Day and The Lilac Festival.

Diners can expect the most comprehensive and freshest farm and water-to table menus on the island. Mission Point uses local Native American fisheries for its signature whitefish used in its award-winning dishes, whitefish caviar, smoked whitefish dip (served warm and blended with soft white cheeses), whitefish benedict and its new weekly All-American Fish Fry at the lakefront Bistro on The Greens.

Weekly signature culinary events also kick-off after Memorial Day Weekend. Further details can be found on the website, reservations required for: Tuesdays: Fish Fry and Beer at the Bistro, a fresh take on the mid-west classic; and Thursdays: BBQ and Bourbon at the Bistro, a fun celebration of pig & whiskey.

Mission Point Resort named John Van Etten, a new superintendent of grounds and gardens, to take the already stunning 18 acres running along the east side of Mackinac Island, overlooking Lake Huron, to the next level. Plantings and improvements are already underway to wow this season and beyond. Van Etten joins the resort team with a five-star pedigree, including long experience with magnificent landscapes, such as New York State’s Mohonk Mountain House, known widely for its lush grounds, lawns and gardens.

Among Van Etten’s newest creations is the unique horticultural feature, the Cocktail Garden, which will focus exclusively on flowers, herbs and edible plants used in the creation of craft cocktails. Under his dutiful care, plantings in the garden will include agastache, lavender, rose-scented geraniums, lemon verbena, golden lemon thyme, nasturtiums, daylilies, pansies, pineapple sage, signet marigolds, basil, and a host of different mints.  As the flowers and herbs of the garden come and go through their blooming cycles, the cocktail lists will be ever changing, staying fresh, seasonal and in tune with Mother Nature’s calendar.

Equally as interesting is the debut of the resort’s first Apothecary Garden in early Autumn. Plantings here are the seedlings of a blossoming, multi-year spa experience overhaul.  Lavender, a variety of roses, spearmint and pot marigold are among the items growing here to be used in spa treatments.  When the new, larger spa opens in 2016, even more items will be incorporated.

This season, the property debuts three commissioned pieces of art by Lily Porter, who herself grew up on the Mackinac and has ancestry on island dating back over a century. Large-scale paintings depicting Lake Huron scenes from Mission Point at sunrise, noon, and sunset by Porter will hang over each of the three grand stone fireplaces in the main hotel lobby.

The new season also brings to Mission Point the Michigan Music Showcase, a rotating lineup of young Michigan musicians including The Accidentals, Blake Elliot, Missy Zenker, E Minor, Jetty Rae, and others, performing live.  A series of signature weekends are also being developed for the 2015 season, with additional ones to be release in the coming weeks.