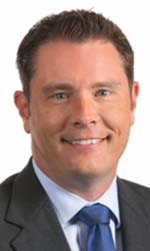 Ryan Krause, CPA, has recently been announced as the new managing principal for the financial services firm Rehmann. He will begin his role in January.

In his new position, Krause will work from his Troy office to increase growth and profitability for Rehmann’s southeast region, which includes the firm’s offices in Ann Arbor, Detroit, Farmington Hills, Troy, and Toledo, Ohio.

Krause is a graduate of Oakland University, where he earned a bachelor’s degree in accounting.