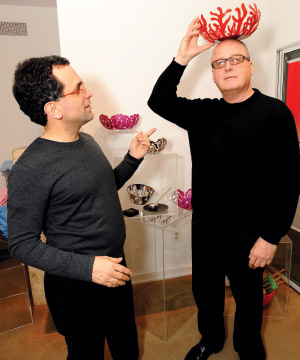 In the world of luxury housewares, Italian design house Alessi SpA has set itself apart from the competition by partnering with world-class architects and designers to produce stunning, memorable products.

During a recent visit to Cranbrook Art Museum’s deSalle Auditorium in Bloomfield Hills, Alberto Alessi, CEO and director of marketing strategies and design management at Alessi, said good design isn’t always about making a popular teapot or serving bowl that’s in every kitchen in the world.

During his recent tour of America, including stops in New York and Indianapolis, Alessi, right, recounted how some designers were actually proud that some of their works did not sell very well. In other words, there was another goal in mind. For example, Alessi spoke of designer Alessandro Mendini, who crafted a kettle that whistles a favorite childhood tune. The project took an especially long time because the artist had to track down a metalworker who could reproduce a softer version of the song.

Alessi also likes working with “rock star” designers like Michael Graves, as such luminaries evoke another dimension to a product. Alessi also isn’t afraid to make fun of himself, as witnessed above with Cranbrook Academy of Art director Reed Kroloff.

“You’ll never know if something works unless you try,” Alessi says. “That’s the great quest we all search for, whether in life or [in] business.”