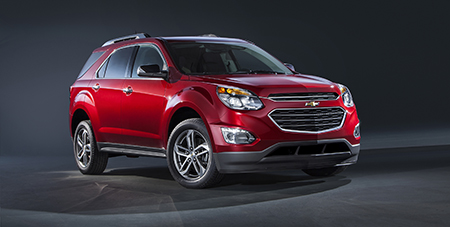 CHICAGO — Chevrolet announced today the 2016 Equinox will go on sale this fall.

“Chevrolet Equinox is a pillar of the compact SUV segment, thanks to a value rooted in great style, efficiency, safety and connectivity,” says Alan Batey, president of GM North America. “The enhancements to the 2016 Equinox make a versatile vehicle an even better choice, and demonstrate Chevrolet’s commitment to delivering the broadest lineup of SUVs in the industry.”

In 2014, Chevrolet sold more than 240,000 Equinox models in the U.S., which held more than 9 percent of the compact SUV market — the largest segment in the auto industry last year, according to Leslie Rajewski, spokeswoman for Chevrolet.

The new Equinox will feature updated styling, wheel design, safety and a will include a color touchscreen radio and rear-vision camera for all entry-level models. The updated SUV has a 3.6L V-6 engine, capable of trailering 3,500 pounds, and has an EPA estimated 32 mpg on the highway.

More information on Chevrolet models can be found at chevrolet.com.