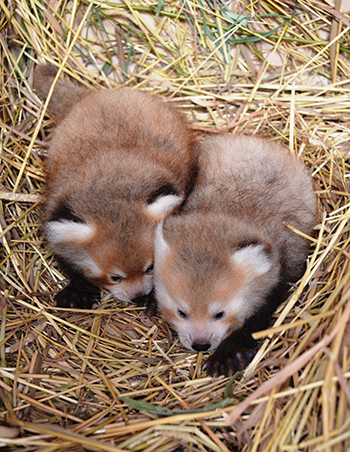 ROYAL OAK — The Detroit Zoo is celebrating the arrival of male red panda twins born June 27, to 8-year-old Ta-Shi. The father, 4-year-old Shifu, came to the Zoo in 2012 with a breeding recommendation from the Association of Zoos and Aquariums Species Survival Plan, a cooperative management plan to ensure genetically healthy, diverse and self-sustaining populations of threatened and endangered species.

The twins’ birth marks the first time the pair have produced offspring and the fifth time Ta-Shi has given birth since her arrival at the Detroit Zoo in 2008.

“Ta-Shi is an experienced and attentive mom and very protective of her babies,” Robert Lessnau said, Detroit Zoological Society curator of mammals. “We’re thrilled to once again add to the captive population of this threatened species.”

Found in the mountainous regions of Nepal, Myanmar and central China, red pandas are classified as “vulnerable” on the International Union for Conservation of Nature’s Red List of Threatened Species due to deforestation.

The red panda (Ailurus fulgens) is a shy and solitary animal, except when mating. Contrary to popular belief, it is not a bear but rather belongs to its own taxonomic family. It is about the size of a house cat, with rust-colored fur and an 18-inch white-ringed tail.

Red pandas are skilled and agile climbers, spending most of their time hanging from tree branches or lounging on limbs. They are most active in the early morning and evening hours.

The Detroit Zoo’s yet-to-be-named red panda twins are spending most of their time in a nest box but can be spotted intermittently in their wooded habitat across from the Amur tigers.