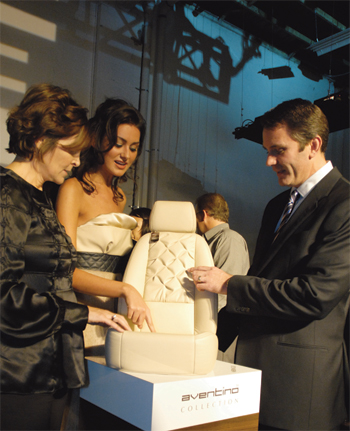 Lear Corp. could’ve shown off its new line of premium leather seats in the usual way by inviting automotive clients, suppliers, and journalists to its headquarters in Southfield. But Ray Scott, Lear’s president of the North American seating business, and his team took the unusual step of creating a fashion show at the Museum of Contemporary Art Detroit (MOCAD), where the new leather was used to accent dresses, suits, and accessories (notice the model’s black belt). “We wanted to create a splash by having the models wear the leather,” Scott says.

“We created a lot of buzz, especially when each of the models stood next to our displays.” The line of leather seats, called the Aventino Collection, will start appearing in luxury vehicles in the coming months. Lear’s Craftsmanship Manager Mara Ignatius (left) says consumers will be able to select from several leather styles to express their own identity.  Fashion, it would seem, is expanding beyond clothes and accessories to things like cell phones. “It made sense [for us],” Scott says, “to link fashion and seating.”