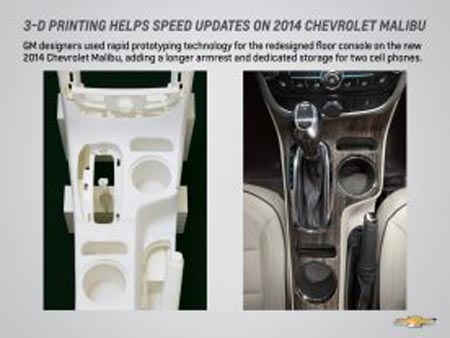 DETROIT — When Chevrolet set out to refresh the Malibu’s interior and exterior for 2014, designers used one of the most cost-effective and time-saving methods in its high-tech tool box: rapid prototyping, also known as 3-D printing.

The processes literally grow prototype parts out of powder or liquid resin at a fraction of the cost associated with building tools to make test parts. Selective laser sintering and stereo lithography — the official names of the processes — helped accelerate Malibu’s development and evaluation. Both processes use specialized software, math data, and digital lasers, which accomplish in days what would have taken weeks of clay sculpting in the past.

Rapid prototyping enables designers and engineers to quickly see, touch, and test versions of individual components and systems in precise one-third scale and full-size models without having to make changes to production tooling, which can cost hundreds of thousands of dollars.

“When you need to get intricate, fully functional prototype parts quickly, nothing beats rapid prototyping,” said Todd Pawlik, chief engineer of Chevrolet mid- and full-size cars. “Our ability to rapidly fabricate inexpensive prototype parts throughout a vehicle enables key components to get confirmed earlier so that we can go from computer models to production-caliber parts.”

In addition, the Malibu development team used rapid prototyping to:

Selective laser sintering fuses plastic, metal, ceramic, or glass powders in cross sections. A laser scans a pattern on the surface of the powder, fusing the particles together into a layer four-thousandths of an inch thick. As each new layer of powder is added, scanned, and fused to the previous one, the part gradually takes shape within the 28-inch-cubed reservoir.

Stereo lithography combines photochemistry and laser technology to build parts from liquid photopolymer resins. The parts are also built up in layers as a UV laser traces the section onto the surface of the resin, curing the liquid into a solid as it scans. Because the resin won’t support the parts being formed, a fine lattice-like structure is generated below each part during the manufacturing process.