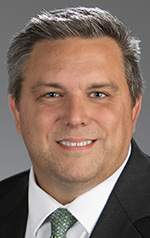 Binkowski, of Troy, will focus on the preparation and prosecution of patent applications, and has experience in electrical, computer, mechanical, and electro-mechanical technologies.

As an engineer, Binkowski worked with computer-controlled machinery at Chrysler Corp., Consumers Energy, and other engineering firms in southeastern Michigan. He is a member of the State Bar of Michigan. He is registered to practice before the United States Patent and Trademark Office and the U. S. District Court for the Eastern District of Michigan.