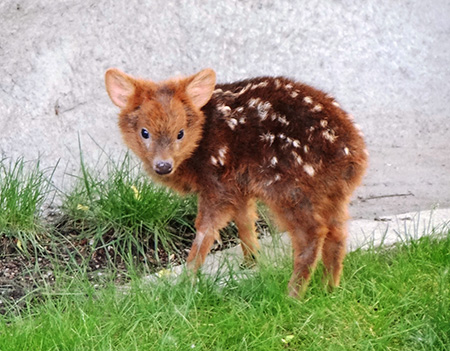 ROYAL OAK — The latest big thing at the Detroit Zoo is actually quite small. A female southern pudu — the smallest species of deer — was born May 20, 2013. The fawn is the fifth pudu born at the Zoo since the species was introduced in 2008.

The fawn is a welcome addition to the captive population of pudus, according to Robert Lessnau, Detroit Zoological Society curator of mammals. “There are less than 30 pudus in U.S. zoos, so this birth is significant, especially since the baby is a female.”

Found in the temperate rainforests of southern Chile and Argentina, the southern pudu (Pudu puda) can reach a height of 18 inches at the shoulder and weigh up to 25 pounds at maturity. The tiny deer has reddish-brown fur and diminutive features, including rounded ears, small black eyes, and short legs.

The fawn joins her parents, 6-year-old Carol and 7-year-old T. Roy, and sister Hamill Girl – born in 2012 – in their habitat near two other South American mammals, the giant anteaters and bush dogs.

The yet-to-be-named fawn makes her debut in time for the Detroit Zoological Society’s annual fundraiser, Sunset at the Zoo, on Friday, June 14. Presented by Strategic Staffing Solutions, the gala event features a strolling supper, live entertainment, dancing, silent and live auctions, and access to the Zoo’s award-winning animal habitats at twilight. To purchase tickets, visit www.detroitzoo.org/sunset.