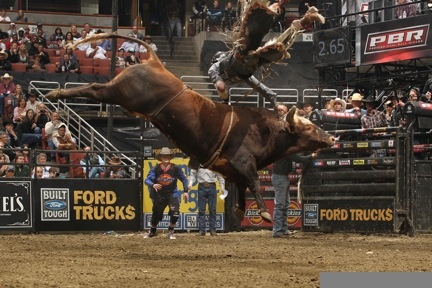 Watch out Detroiters! The bulls are coming to town. No, not the Chicago Bulls, but actual bucking bulls involved in a different type of sport, bull riding.

Professional Bull Riders, Inc. (PBR), headquartered in Pueblo, Colo., will host The Detroit “Built Ford Tough Series” (BFTS) Invitational on March 10 at Ford Field. The event will be broadcast live nationally, and the Detroit Academy of Arts and Sciences student choir will open the show.

Though not a sport usually associated with the Motor City, the invitational is expected to draw a crowd of more than 30,000 people, says Sean Gleason, PBR’s COO. A crowd that size could spell big money for local Detroit hotels, restaurants, and other businesses.

Taking ticket sales, lodging, dining, and other consumer spending into consideration, the event is projected to generate $5.4 million in economic activity, says David Littmann, senior economist with the Mackinac Center for Public Policy, and former chief economist for Comerica Bank in Detroit.

The spending includes massive preparation needs, which begin four days before the invitational. It entails hauling in up to eight million pounds of dirt, bucking shoots, sound equipment, and one of the largest video screens in the country.

The Detroit BFTS Invitational is the first of what could be an annual event. “Detroit is the home of our sponsor, Ford, and it’s a major market we haven’t established yet,” says Gleason, “We are one of the best kept secrets that half of the population already knows about. We will come back to Detroit. It’s a commitment to building a base of support.”

More than 100 million viewers watch PBR television programming annually. The growing interest in the sport is associated with the intensity and risk involved. “It’s the worlds most dangerous sport wrapped in a rock concert environment. It appeals to all,” Gleason says.

However, UDetroit Café co-owner Brian Pastoria says large spectator sports like the Detoit BFTS Invitational make it more challenging to attract patrons. “These one time events draw people who never go downtown. They’ll park their cars, go to the event, and leave. Meanwhile, parking lots will jack up their prices to $30 or $40.”

According to Pastoria, his patrons are prevented from coming to his entertainment-based restaurant in Harmonie Park because of the high parking prices on days when special events are taking place downtown. “It doesn’t make sense. People aren’t going to pay $40 to park, so they can buy a $2 beer and a $6 burger,” Pastoria says.

However, according to Gleason, the fans that will come out for the Invitational may be the same fans drawn to a Lions or Tigers game. “The fans vary by market. In New York City, 60 percent of the fans are women between the ages of 24 to 34. However, in Billings, Mont., fans tend to be rural. We have fans that are rural, urban, and suburban,” Gleason says.

With a growing fan base and a rising popularity for high adrenaline sports, the future of PBR shows promise. “We want to develop pockets of fans in unopened markets. We are a TV based sport, and the future of the sport is to build brand awareness,” Gleason says.