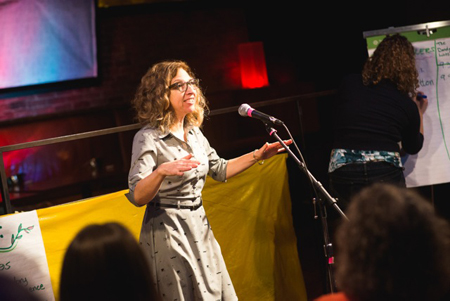 DETROIT — Combine entrepreneurs telling true stories, live music, great food, and networking, and you have Entre-Slam, a monthly forum for entrepreneurs to hear the truth and the raw stories about what it is really like out there fighting to survive as a lone wolf.

Started in Ann Arbor, Michigan, Entre-Slam takes the work out of networking. To date, thousands of entrepreneurs have been drawn to the fire. As recently recognized by CNN/Fortune, Entre-Slam’s innovative concept is ready for its debut in Detroit.

“We are thrilled to bring Entre-Slam to Detroit.” states Christa Chambers-Price, Entre-Slam Co-Founder. “This city has seen some tough days but we join many others who believe that the best is yet to come. When we pass along our stories of success, triumph and failure, we strengthen others who have started their own businesses or who are thinking about it. Detroit is blessed with a rich, kaleidoscope of entrepreneurs and solopreneurs, from farmers to chefs to high-tech bio business founders, all of whom have stories to tell.”

Entre-Slam Detroit will be held at Bleu Detroit on Woodward Avenue at 7:00 pm on July 11th and will be on the 2nd Thursday of every month. There will be storytelling slots for eight entrepreneurs per event. A drawing will determine which storytellers will be featured. Each month will have a theme and the entrepreneurs will have five minutes to tell their business story. Entre-Slam will also feature Chef-Slams (food competitions between local restaurants) and special guest half-time show performances. The public is invited to attend and enjoy the stories, live music and food.