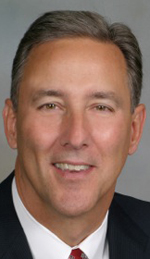 SOUTHFIELD — Plante Moran’s Gordon Krater has started his second four-year term as managing partner. Krater, the sixth managing partner in the firm’s history, initially took the helm in July 2009 and will continue to serve until July 2017.  Krater became managing partner during the darkest days of the recession, and guided the firm into a solid growth trajectory that includes the opening of a Detroit office in this fall and a significant merger with Chicago-based Blackman Kallick in July 2012.

“The last four years have brought immense challenges to the profession and the firm, but there have been opportunities for fine-tuning client service, growth of specialized services and new avenues for staff development and client engagement too, and those areas all remain an important part of my leadership focus moving into the next four years,” Krater says. “We’ve also gotten more deeply entrenched in our communities, with Plante Moran Cares outreach projects that put a firm-wide emphasis on critical areas of need, such as literacy, domestic violence and supporting our military, while strengthening our internal culture through these efforts as well.”

Krater says the new Detroit office will initially house 75 employees and puts the firm in the heart of Downtown Detroit’s business resurgence, while attracting talent that wants to be part of a growing urban energy. The merger with Blackman Kallick, he says deepened Plante Moran’s capabilities in the Chicago market.

“Chicagoland, with its huge business base, continues to present tremendous opportunities for Plante Moran to share our industry expertise with middle market clients,” Krater says. “While we have 21 offices in the Midwest and abroad, we are organized by industry specialization, and this is a strong selling point for prospective clients who want deep industry knowledge in addition to a conveniently located service provider.”

Krater, of Dearborn, says one of the firm’s continued areas of interest is private-equity owned companies.

“An estimated 48 percent of middle market companies are owned by private-equity firms and we are going to be even more aggressive in going after that niche. We understand middle market companies and know how to serve them. Client satisfaction surveys that consistently approach 99 percent approval ratings affirm that our middle market clients find the business advisory services they need to prosper when they partner with Plante Moran,” Krater says.