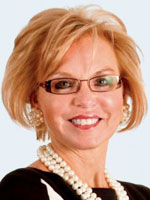 SOUTHFIELD — Former Charter One Bank CEO and President Sandra Pierce has joined the board of directors for Barton Malow Enterprise. The announcement was made by Barton Malow President Ryan Maibach.

“Sandy aligns exceptionally well with Barton Malow’s core values of Integrity, partnership and empowerment,” said Maibach. “She is a visionary leader and I’m confident in her ability to help us achieve our long term goals and envisioned future at Barton Malow.”

Pierce began her career as a part-time bank teller and worked her way up the NBD organization to senior vice president. She held various executive positions at NBD successor organizations. In 2004, Pierce lead Charter One Bank, Michigan and Indiana. After eight years as CEO and president, she left in  June 2012 to consider other opportunities. She now serves as the Henry Ford Health System’s board of trustees chair and is the chair of the Detroit Financial Advisory Board, working to help solve the city’s budget challenges.

Pierce has served as chair of the Detroit Regional Chamber and director of the Detroit Economic Club and the Detroit RiverFront Conservancy. She now chairs The Parade Company board and is a vice chair for the Business Leaders for Michigan.  She serves on the Wayne State University School of Business Administration’s board of visitors and the Detroit Public Schools Bond Advisory and Fiscal Responsibility committee

Born in Detroit, she holds a bachelor’s degree in business administration and an MBA from Wayne State University.

“I have worked with Sandy for over 20 years on various community boards,” says Ben Maibach, III, Barton Malow Enterprise board chairman. “Sandy is a very talented leader who gets things done. We believe Sandy will help elevate Barton Malow’s performance and she will serve as an empowering role model.”