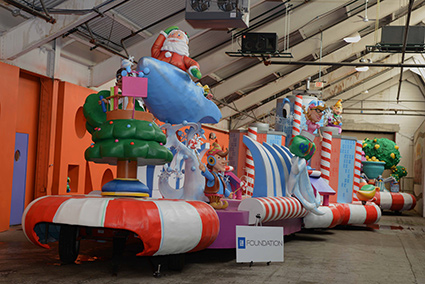 With one of the country’s most celebrated Thanksgiving parades just weeks away, The Parade Company revealed the new GM Foundation float, “Innovation Workshop,”  today during the 16th Annual VIP Pancake Breakfast.

Karen Nicklin, manager of Educational Initiatives and Disaster Relief for the GM Foundation and Tony Michaels, president & CEO of The Parade Company, unveiled the larger than life holiday-themed float live during  the Pancake Breakfast attended by Gov. Rick Snyder, Mayor Mike Duggan, and hundreds of Detroit business and community leaders.

The 100-foot long float inspired by innovation, the holidays, and Santa’s workshop, features a futuristic Santa’s sleigh, programmed to travel around the country in just eight hours and handcrafted spinning elves representing GM Foundation’s commitment to STEM education initiatives. Designed and built by The Parade Company artists and GM Design employees, the float also boasts a 16-foot tall model of the GM Renaissance Center and candy canes and peppermint platforms that would require more than 900 pounds of sugar to create.

“America’s Thanksgiving Parade  is an iconic venue and a terrific opportunity for GM to showcase something so important to the future — getting kids excited about technology and innovation,” Nicklin says. “As a strong supporter of STEM, this float celebrates innovation, and what better way than a holiday high-tech upgrade to Santa’s transportation.”

The parade will be featured on WDIV-TV Local 4, including a one-hour national broadcast reaching more than 150 major cities across the country. News/Talk 760 WJR will also broadcast live from the parade route.