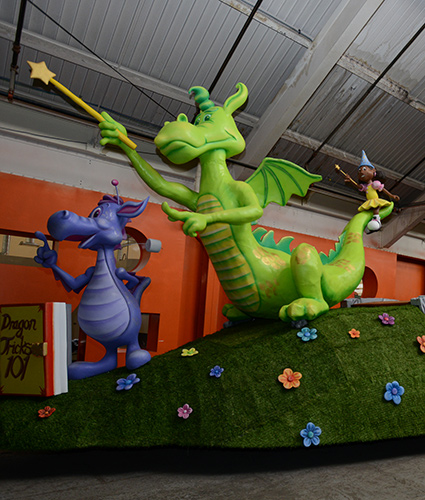 A quarter century ago, Art Van Elslander kept the magic alive for America’s Thanksgiving Parade by writing a historic check in 1990 to support one of Michigan’s most beloved traditions and ensure it would be around for generations.

To commemorate this significant anniversary and Art Van Furniture’s commitment to the parade over the years, the retailer’s enchanting new “Keeping the Magic Alive” float will make its way down Woodward Avenue on Thanksgiving morning. The larger-than-life float was unveiled Thursday night during The Parade Company’s annual Parade Preview Party.

“America’s Thanksgiving Parade presented by Art Van is a remarkable tradition and we are proud to have been a historic part of keeping it alive a quarter century ago,” said Art Van Elslander, founder and chairman of Art Van Furniture. “We are committed to the future of this iconic  parade and look forward to sharing our new float with the thousands of families along Woodward Avenue and the millions watching across the country.”

Tony Michaels, president and CEO of The Parade Company, was joined by Van Elslander and more than 1,200 parade supporters for the grand unveil. Art Van Furniture became the presenting sponsor of the parade in 2013.

“We are so grateful to Art Van for his incredible commitment to the parade twenty five years ago and his continued support today,” Michaels said. “He has been a wonderful partner over the years, including his presenting sponsorship, which means so much to the future of The Parade Company.”

The “Keeping the Magic  Alive” float was designed in partnership with Art Van Furniture and built by The Parade Company. Sitting 110 feet long, the star of the float is an oversized dragon that billows smoke from its nose and a winter wonderland snow globe with a castle that pops out. The float will also feature rocking horses and a mystical wizard waving his magic wand.

This year’s parade theme  is “So Happy Together.” Recognized as one of the best Thanksgiving parades in the country by U.S News & World Report Travel,  the parade will be held on Thursday, Nov. 26. For more information, visit theparade.org.