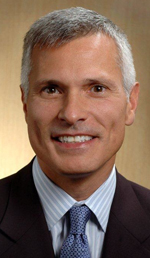 DETROIT —The Parade Co. has named Eric B. Larson, managing partner of Bedrock Real Estate Services LLC, as its new Chairman of the board of directors for the Michigan Thanksgiving Parade Foundation.

“We are thrilled to have Eric as our new chairman and believe his dedication to the community and support of The Parade Co. will be invaluable to the growth of Detroit’s cherished traditions,” said Tony Michaels, president and CEO, The Parade Co. “I would also like to recognize Sandra Pierce for her time as our chair of the foundation. Her incredible commitment and leadership resulted in tremendous success for our organization and the region.”

“I am privileged to expand upon my longtime involvement with this remarkable organization that for decades has shown its dedication to the Detroit community by creating and producing the Target Fireworks, America’s Thanksgiving Parade, and many other extraordinary experiences in our region and across the country,”  Larson said.

As founder, president and chief executive officer of Larson Realty Group, Larson serves as chairman of The Robert C. Larson Leadership Initiative and Urban Land Institute Detroit Governance Committee. He has served on the board of directors for many organizations throughout Metropolitan Detroit and was the Grand Jester of The Parade Company’s Distinguished Clown Corp. Throughout his 30-year career, Larson has developed, financed, owned and managed more than $4 billion in real estate, including General Motors’ Renaissance Center and Millender Center, One Detroit Center and the A. Alfred Taubman Center for Design Education in downtown Detroit.