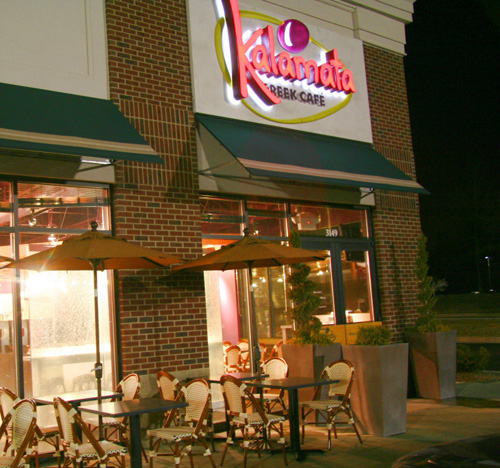 Opening a restaurant is risky, but to open at the brink of a national recession could have been a death sentence. Brothers Tom and Dennis Chinonis, who launched Kalamata Greek Grill in Troy in 2008, appear to have found the secret to success.

Tom Chinonis says the idea behind the restaurant and future franchise opportunities came from combining their Greek family recipes with the emerging concept of fast-causal dining.

“Always in the back of our minds was this idea for a Greek restaurant, but that wasn’t a formal restaurant or a Coney Island. That is not where we thought things were heading,” Tom says. “Things like Boston Market and Chipotle were starting to explode and we started asking ourselves, ‘Is there a Greek restaurant that is doing that?’”

Although Kalamata is a new venture, the pair wasn’t foreign to the restaurant industry. Prior to opening the Greek restaurant, Dennis served as director of new store development at YaYa’s Flame Broiled Chicken — a successful franchise founded by their father and uncle in the 1980s (multiple locations in Michigan and Florida).

“As a family-run business, I was involved in all aspects of operations — both at the store level and the franchise level,” Dennis says. “This provided me a unique opportunity to learn the entire business.”

In 2003, Tom and Dennis began researching their concept by traveling around the country, trying out recipes, and developing the operations. “We could come up with great tasting food, that was never the problem,” Tom says. “But translating that into this fast-casual concept was difficult, and is really what makes us different.”

To set the template for franchise outlets, the brothers hired esteemed restaurant designer Ron Rea in Birmingham to create a unique and welcoming space. The décor includes wooden tables, plastic brown wicker chairs, and orange bench booth seating while a purple-colored wall is lined with black and white photos from their aunt’s family albums.

Apart from the design, the brothers focused on food items they could make quickly, while still maintaining the health and quality level they wanted. “People like the idea of getting fresh Greek food they know is real and authentic,” Tom says. “There are so many cooking shows, so much knowledge out there, that people know what they’re getting. Especially around here, people know Greek food.”

Menu items include Saganaki, spinach pie, Greek lasagna, and baklava as well as chicken lemon rice soup made from a family recipe and homemade, grilled pita bread (made fresh daily). Entrée prices range from $5-$10. The signature dish is the gyro sandwich, available in five different styles. It also can be custom ordered.

In true Detroit fashion, customers watch their meal being prepared in an assembly-line style. Seemingly by the time someone can say “Opa!” his or her food is ready (the goal is to have each meal ready in under a minute).

The 2,300-square-foot location — on Crooks, just north of Big Beaver — works because most of their clientele are office workers, and quite a number of customers order online, Tom says. “A lot of our customers get it to go and they’re just buzzing through here. It lets someone get a very good meal very quickly.”

The brothers plan to franchise their first five restaurants in 2012, all in metro Detroit. Within three to five years, 40 to 60 restaurants are planned across Michigan and nationwide. “The whole goal of opening this restaurant was to develop a chain,” Tom says. “There’s a ton of quick-serve pizza and sub places. There’s a wide open space for a fast-casual Greek restaurant.”

Franchise expert Rebecca Turner agrees. “Detroit is well known for their pizza concepts like Jet’s, Little Caesars, and Hungry Howie’s,” says Turner, a shareholder at the law firm of Maddin, Hauser, Wartell, Roth & Heller in Southfield. “There seems to be an opening in the quick serve industry for a Greek restaurant (that) could be a good opportunity and a great entry point into the franchise industry.”

Turner has been practicing franchise law since 2002, and her husband and his family owns and operates several Jimmy John’s restaurants in the area.

According to a 2007 report by the International Franchise Association, franchising represents more than $58 million in economic output and created more than 505,100 jobs in Michigan.

“The franchise business has been growing the last several years because of the changes in the auto industry. People are looking into it as a second career,” Turner says. “It gives the entrepreneurial minded person a business where they can be their own boss.”

Tom Chinonis, who left a career as a corporate lawyer at Foley & Lardner in Detroit to open Kalamata, says it was the right choice. “It got to the point where the money wasn’t relevant anymore and doing my own thing became the most important goal in my life.”

Tom is not the only one capitalizing on the franchising trend that has hit Michigan. Bill Zellmer and Lonnie Griggs are opening the first franchised Bagger Dave’s Legendary Burgers Tavern in Cape Girardeau, Mo., and plan to open five more over the next five years across the country.

Southfield-based Diversified Restaurant Holdings Inc. developed Bagger Dave’s and opened its first restaurant in Berkley in January 2008. Since then the company has opened five more throughout Michigan, including Novi, Ann Arbor, and East Lansing.