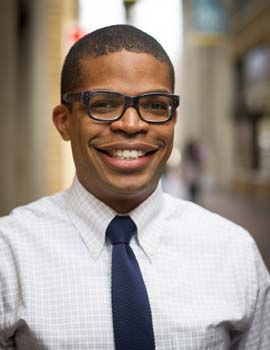 “We are very excited to have Omari join our strong CultureSource team,” says Rich Homberg, board chair of CultureSource and president and CEO of Detroit Public Television. “We believe he will be a great addition and an outstanding leader with the ability to take the organization to the next level. He has a deep knowledge of, and passion for, the arts and culture of Detroit and Ann Arbor, as well as a great understanding of the community on a state and national level, both of which will serve our organization well.”

In his most recent role as vice president of strategic initiatives at the Ann Arbor Art Center, Rush was responsible for growing the organization’s financial capacity and resources, managing highly visible public arts projects for the city of Ann Arbor, and supervising the development staff. Prior to this role, Rush served in several other leadership positions at the the Ann Arbor Art Center center, including director of external relations and curator of public programs. Before joining the Ann Arbor Art Center in 2014, Rush worked as educational manager of University Musical Society at the University of Michigan. Rush earned a bachelor of music from Florida State University and a master of music from U-M.

Rush is currently involved in many arts and culture organizations around the country. He is on an advisory committee for the Association of Performing Arts Professionals in Washington D.C in addition to being a member of the Next Generation of Philanthropists of the Ann Arbor Area Community Foundation. He has served as vice chair for the governor-appointed Michigan Council for Arts and Cultural Affairs since 2013 and is on the board of directors for the Washington D.C.-based National Assembly of State Arts Agencies as well as Minneapolis-based Arts Midwest.

“I feel tremendous optimism about working with CultureSource to cultivate an even more collaborative, engaged and accessible arts and culture sector,” says Rush. “And knowing this work is broadly in service of southeast Michigan is a particular point of pride and a constant motivator.”