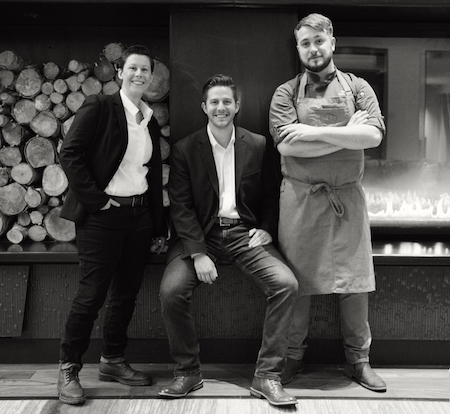 As executive chef, Miller is in the process of introducing a new menu, slated to include seasonal selections and popular dishes. In addition to the keeping with the restaurant’s pasture-to-fork philosophy, the new menu will focus on sharable selections.

“I’m excited about the attention that the Detroit food scene has been receiving,” says Miller. “We are definitely a foodie city, and it’s great that the rest of the world is finally beginning to sit up and take notice.  Detroit has an attitude. It has an eclectic food scene that announces, ‘this is who we are, and we will do things our way.’ I look forward to guiding, along with our entire team, Toasted Oak’s contributions to metro Detroit’s culinary landscape.”

Miller attended Le Cordon Bleu College of Culinary Arts in Chicago. In addition to the Toasted Oak, he has worked at Kuma’s Corner in Chicago, Nomi at Chicago’s Park Hyatt, Chicago’s Arcadia, Cork in Flint, and The Apparatus Room at the Detroit Foundation Hotel.

Anthony is a Schoolcraft College Culinary Arts Program graduate and received a bachelor’s degree from Madonna University in hospitality management. Beginning his career at Guernsey Farms Dairy in the role of restaurant manager, he later served as restaurant supervisor at the Country Club of Detroit, and then as Concord Hospitality Enterprises/Marriott Food and Beverage task force member, where he assisted with openings and operations of Ohio restaurants such as Buckeye Bourbon House and Dewberry 1850. He has worked at The Baronette Renaissance Hotel and Toasted Oak Grill & Market since 2014 in roles including banquet cook, restaurant supervisor, banquet manager, and now director of food and beverage.

The addition of Phillips as restaurant manager brings increased focus to culinary and mixology expertise, in addition to customer service. Her career started as a bartender at Cinco Lagos, formerly 5 Lakes Grille, before she moved to The Root Restaurant & Bar, where she held the positions of server, bartender, and front-of-house manager. She came to The Baronette Renaissance Hotel and Toasted Oak Grill & Market in 2015 where she worked as a bartender, restaurant supervisor, and now restaurant manager. She has participated in many local and regional mixology competitions and has been on Food Network’s “On the Rocks.”