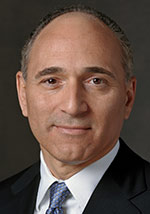 DETROIT –  Novartis CEO Joseph Jimenez has been nominated to the board of directors for General Motors Co.

Jimenez has been CEO of Novartis since 2010. He joined the company in 2007 to lead the consumer health division. Previously, he served in senior leadership roles in the H.J. Heinz Co and began his career at the Clorox Co. Prior to joining Novartis, he was a non-executive director of AstraZeneca PLC in the United Kingdom. He also was an adviser for the private equity organization Blackstone Group in the U.S.

Jimenez earned a bachelor’s in economics from Stanford University and an MBA from the University of California, Berkeley.

Jimenez will stand for election at GM’s Annual Meeting of Stockholders, to held June 9, at GM’s Global Headquarters in Detroit.

GM also announced E. Neville Isdell will not stand for re-election at the company’s annual meeting, pursuant to the board’s retirement age policy.

Isdell has served on GM’s board since 2009. Prior to serving on GM’s board he was a member of the board of directors of General Motors Corp. from 2008 to 2009. Isdell’s highly regarded career includes leading the Coca-Cola Co., serving as chairman and CEO from 2004 to 2008, and chairman until his retirement in 2009.